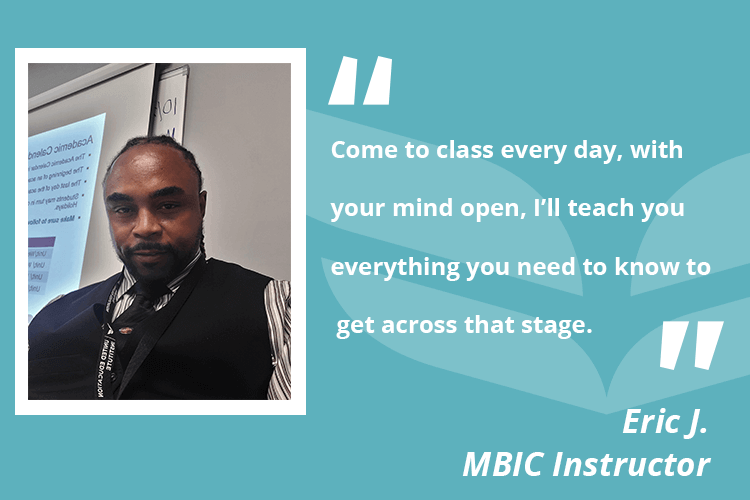 “If you come to my class every day, and you come with your mind open, I’ll teach you everything you need to know to get across that stage.”

A native of Milwaukee, Wisconsin, Eric Jefferson was raised to have a worker’s drive and a servant’s heart. His mom was a preacher at a local church, and from an early age, she taught Eric that one’s value comes from within and through actions that empower others — friends, neighbors, and even perfect strangers.

“She always embedded in me to help people and to be a mentor however I can, even if it means giving away my last dollar,” he said. “I continue to believe in being a lender and not a borrower.”

These days, Eric strives to elevate others from the front of a classroom, lending professional knowledge and personal perspective as an instructor at UEI’s newest campus in Las Vegas. UEI Las Vegas began offering classes in the fall of 2020.

As a first-year instructor in UEI’s Medical Billing and Insurance Coding Program department, Eric gets to combine several years of professional experience at a Fortune 500 company with a strong desire to mentor students from all walks of life.

“I figured it is part of my calling to help people get their lives on track and become productive citizens of society,” Eric said. “If you come to my class every day, and you come with your mind open, I’ll teach you everything you need to know to get across that stage.”

Education as a Path to Success

Eric has always been a self-described “numbers guy,” the sort of kid who jumped at the chance to compete on his school’s Math Olympics team. So, it’s little surprise numbers play such a critical role in his chosen career.

“Going into medical billing and coding, you have to be good with numbers, so career-wise, this felt like a good fit for me,” he said. “When I first got a taste of it in school, I thought, yeah, I can definitely do this.”

Getting to that realization took some time, however. Eric grew up in an impoverished Milwaukee neighborhood that he said was shrouded in negativity. He didn’t finish high school, instead relying on his worker’s drive and persistence.

From the age of 12, Eric said he always had a job — shoveling snow, mowing lawns, delivering papers and flipping burgers. He got into contracting and construction when he got a little older.

“Epsom salt baths became my best friends,” he joked. “It only took a few years of that to realize that I wanted to work smarter, not harder.”

So, Eric circled back toward education, earning his GED and then attending college. He graduated from a Medical Billing and Coding program and soon found a job at a multi-billion dollar corporation, within which he excelled. He worked there for 12 years.

“I moved to the highest level of their billing department, then went over to e-commerce, reimbursement, and training for supervisor and lead,” he said. “I was meticulous to details, and I came up with ideas for company policies.”

All the while Eric was advancing through his career, he never lost that servant’s mentality, always looking for opportunities to mentor kids in his neighborhood. He would teach them about recording and mixing music at his recording studio.

“It was an opportunity to help kids in the area,” he said.

In a lot of ways, Eric views his position at UEI Las Vegas in a similar light — a way to pull people from difficult circumstances and help them see the possibilities in life.

“Students here come from all walks of life, some of them from backgrounds where people tell them they’re not going to be anything,” he said. “My job is to help them become positive thinkers — to help them eradicate the negativity and add something positive in their lives so they can take care of their families.”

As a career, Eric feels that medical billing and insurance coding is an option that, while not the most glamorous, is fulfilling and can lead to strong career advancement. It’s a field that offers a ton of diversity and opportunities for growth.

And, while it’s often perceived as a data-driven career, medical billing and coding provides the oxygen that keeps the entire healthcare industry alive.

“No doctor or physician can get paid without a good medical biller or coder, so you’re definitely a necessary worker,” he said. “It’s a learnable subject, if taught correctly, and it’s one of those jobs that can actually change your life. It caters to all walks of life.”

While Eric is always seeking opportunities to advise others, he’s often taken on the mentee role as of late. As a first-year instructor at UEI, he said he’s gleaned a lot from the training, instruction and experience of other faculty members.

“A lot of what I’ve learned, I’ve learned from Ms. Joseph,” he said. “Everyone’s like a really big family over here. All of our teachers have the same core principles, and that’s to be obsessed with student success.”

“Eric is a great teammate, and a pleasure to work with! The students love his hard work, and determination,” T’ia said.

And, whether they come from difficult personal or economic backgrounds or have encountered difficulties in education, Eric feels being able to relate to his students will go far in helping them achieve success at UEI.

“I can say I made it from being on the streets and being homeless and everything else, to making it as an instructor in a classroom,” he said. “The same ones facing issues that I’ve faced can look at me for help. And, it all starts with changing the way they think, both about their past and where they’re heading in life.”

“Aside from his years of experience and accolades, Eric brings a genuine heart of compassion to the classroom. Not one student is left out of his reach. In fact, he goes the extra mile to ensure that every student in his class stays on top of their weekly homework. If there is a student showing any sign of struggle, he is right there to catch them and encourage them to be their best and to show up for themselves and works to get them back on track,” Dalila said. “He never fails to communicate that he cares about his students’ success with them and with me. He keeps me informed almost on a daily basis on his student progress. That way if I have an idea to share, he is open to the assist. It has been my greatest privilege to support Eric and watch him grow passionate about instructing students that are well on their way to becoming allied health professionals. Eric and Tia are both assets to the UEI Las Vegas campus. As they work in tandem, they are the magic that is the MBIC Las Vegas team!”

“Eric is a passionate, powerful, and consistent advocate for our students. Every time I pass his classroom he is standing among his students, offering advice or information on how to be successful on assignments. Eric is as patient as he is powerful, often tutoring students who need a bit of additional support. It is a pleasure to watch him in action, as he operates with our students’ futures in mind,” said Jim York, UEI Las Vegas Campus President and Vice President of Leadership, Culture, and Learning.