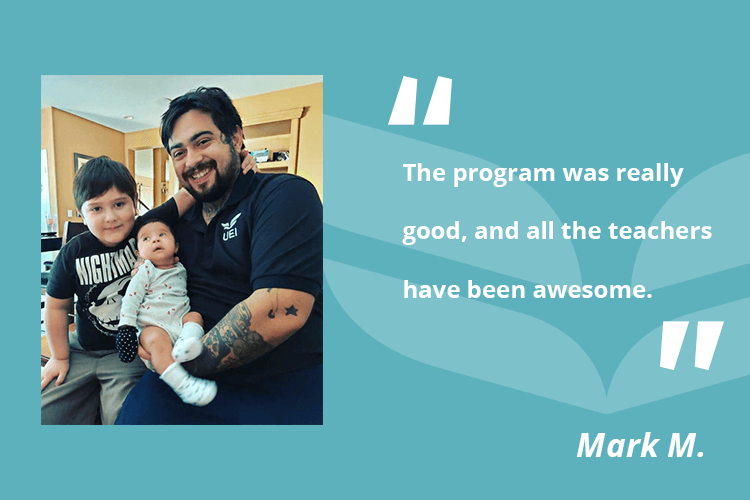 Riverside HVAC Grad Motivated by Brighter Future for His Family

When Mark Martinez was just 5 years old, his baby brother drowned, a tragedy that cast a dark cloud over his family that seemingly lasted for years.

The guilt and hardship was too much for his mom to bear, it seemed, and she divorced Mark’s father and eventually abandoned the family altogether. As a result of this, Mark experienced a rough childhood which lacked direction. He dropped out of high school and started experimenting with drugs. This lasted into his early 20s.

Then, something forced him to consider his life and his future in terms much broader than himself.

“My life was going nowhere,” he said. “But then, when I had my first kid and became a father, I started changing my life around. And then, when my second kid was coming, I knew I had to step it up a lot more and I had to find a career. I needed a trade so that I wouldn’t be stuck at dead-end jobs.”

This desire to learn a trade led him to UEI College in Riverside, CA. He enrolled in (and fully committed to) the Heating, Ventilation and Air Conditioning (HVAC Program), and in less than a year, he’s already working as a commercial HVAC service technician.

“I just wanted to do something I’d be able to accomplish and be able to be happy with a career,” Mark said. “To find a career to help support my family is definitely rewarding. I’ll be able to teach this to my son someday, if he ever wants to pick it up.”

When he was younger and on his own, Mark, now 34, said he worked mainly restaurant jobs to support himself. When his son was born 7 years ago, however, Mark attempted to secure a position that paid better and had more long-term growth potential.

He wound up connecting with a temp agency that placed him in local warehouse jobs, which at first he felt could lead to something more permanent. That never happened.

“They led to nowhere … just a lot of broken promises,” Mark said. “You go to work every day, you put in all the effort, and it would just get you nowhere. There was no opportunity to move up.”

Lacking a high school diploma, he kept chugging along this route with a feeling that he had few other options. News he was about to become the father of a baby girl, however, motivated him to expand his career possibilities.

“With another baby on the way, I just got tired of going from place to place and working at temp agencies,” he said. “I wanted to learn something – catch a trade – and I ended up finding UEI close by.”

Mark said he knew a couple of family members who’d worked in the HVAC trade, and it seemed like a good career. “I figured people are always going to need heating and air conditioning,” he said.

So, starting last September – just a month after his wife gave birth to his baby daughter – he enrolled in the HVAC program at UEI’s Riverside campus.

The first few weeks of the program were fairly difficult as he got used to being back at school, Mark said. But, his personal drive coupled with support from his family kept him going through the rough patches.

“You really have to be dedicated and hungry for it, which I was,” Mark said. “There were a few times, though, when I felt like I wanted to quit, but my wife told me, ‘You’re doing good right now. Keep a positive mind.’ And, I kept with the program.”

The fact he was also striving to earn his high school diploma while learning the HVAC trade added to the stress of attending school. But, Mark said his instructors Andrew Uraine, Kenneth Marrs and Brian Vazquez kept him focused and motivated throughout his time at UEI.

“The program was really good, and all the teachers have been awesome,” he said. “They’re all just so motivating, and they’ll tell us about their experiences working in HVAC and the mistakes they’ve made. They let us know so we can try to avoid making the same mistakes out in the field.”

“Mark is a self-driven, self-motivated, and hard-working student. Having him as one of my students has been an honor and a privilege,” Mr. Vazquez said.  “When he comes into class, he is focused and determined to get things done. He is always willing to help other students that are struggling with encouragement and helps encourage them. His positivity and willingness to help others is priceless to say the least. I am very proud of Mark and confident that he is going to succeed.”

This level of honest mentorship from his instructors is already paying off for Mark. In February, he was hired into his first HVAC tech position working on commercial units.

“It means a lot to me to finish the program and graduate,” Mark said. “I’m going to be the first male in my immediate family to graduate from a college or trade school. And now that I’m working in the industry, I’m going to keep learning ad continuing my education by trying to learn every angle of the whole HVAC industry.”

“From all of us at UEI College Riverside, congratulations to Mark and his family,” said Kevin Quirk, UEI Riverside Campus President. “He has been a model student, and we look forward to you being a model graduate. We wish you the best of success in your new career.”