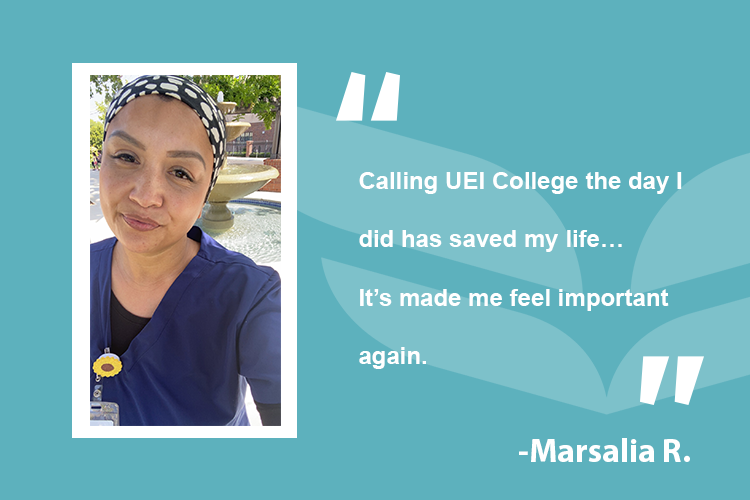 Marsalia Ridenour is the kind of person who has always worked multiple jobs and held leadership positions but when her adult son suddenly died, it caused her to take a step back and start a new dream.

“It was like I wasn’t capable of getting out of bed every day,” she said. “Slowly but surely, I made myself get up more and more… I needed to keep myself busy.”

Marsalia walked away from her position at a large corporation and instead found a part-time job at a medical office. When she learned about becoming a Medical Assistant through UEI College in Sacramento, it seemed like a good option. The Medical Assistant Program only required her to be on campus two nights a week and the work interested her.

“I remember my first class and getting to know my teacher. I remember pulling her aside and told her I’m new in grief,” Marsalia said. “I really thought I would miss classes or be late. I was crying on my way to work. I would cry on the way home. I couldn’t deal with losing my son.”

At the end of the first course, Marsalia found herself on the honor roll. She visited her son Daniel’s grave and made a commitment to always keep her grades at that same level. She also maintained perfect attendance.

“I always wanted him to be proud and to have a good life. Even though he’s not here, I still feel like I’m making him proud,” she said. “I can picture him in heaven talking to his friends and saying ‘Look at my mom.’”

‘I NOTICED I WAS MAKING A DIFFERENCE’

“Marsalia was definitely a leader. She was an advocate for many of the students,” said Anese Warfield, MA instructor. “She had a lot that was going on personally, especially with the passing of her son. I think that because she wanted to make him proud, she was so focused on making herself better as a person, that she just pushed through. A lot of the students were going through similar situations to where she somewhat became a mom to them.”

Ms. Warfield asked Marsalia to become an ambassador for the class. In addition to helping with school problems, Marsalia began to open up to her peers about her personal struggles and found a deeper way to help them.

“When I shared my story, I had more than one girl come to me and say thank you for sharing with me,” Marsalia said. “Their grades changed, and their attendance changed. My sharing how I was living my life was motivating other people. I started talking to other parents and I noticed I was making a difference to other people. Other people were depending on what I was doing. I was motivating them to get out of bed and do this or that. I had a feeling like it’s ok, you can do it.”

Marsalia appreciated that her instructors never took it easy on her.

“They didn’t let me excuse myself,” she said. “It drove me to do well. I wanted to make sure I didn’t fail. If they would have given me an out, I probably would have taken it.”

Marsalia’s example was genuine and relatable for many students.

“I say to my students you have to push through no matter what life throws at you,” Ms. Warfield said. “You never know what opportunity is there for you at the end of the door. She showed that. I’m so proud of her.”

‘YOU HAVE TO WORK HARD‘

Marsalia was only 16 when she gave birth to her son. She started an alarm company business with her ex-husband and it ended up grossing over one million dollars in its first year. The company is still a leader in the industry today, but Marsalia stepped down from it many years ago. She has held positions at major corporations, but it was never a passion like the medical field turned out to be.

“I found I was really good at it,” Marsalia said. “I love taking blood. My favorite part outside of patient care is talking to patients. I really love it. My favorite thing in school was everything. It wasn’t the easiest thing but every time I would learn something new or get the program down, it made me feel like I was accomplishing something.”

Marsalia never received a grade less than an A. Three weeks into her externship with Dignity Health, she was offered a full-time position.

“It is what you put into it,” Marsalia said. “It’s a great program but if you don’t work hard for it won’t do any good. If you want something great from it, you have to put in your best. You have to work hard… Calling UEI College the day I did has saved my life… It’s made me feel important again.”

Daniel’s memory lives on through his two children, Marsalia’s grandchildren. She also shares who he was with those around her.

“Never give up. No matter who you’ve lost, they would never want you to be sitting down here, wanting to die. I’m making sure I am doing what I would want my son to do. If it was the other way around, I would want him to live… Find what works for you. Talk about it. Be open. You never know who else is going through the same thing you’re going through.”