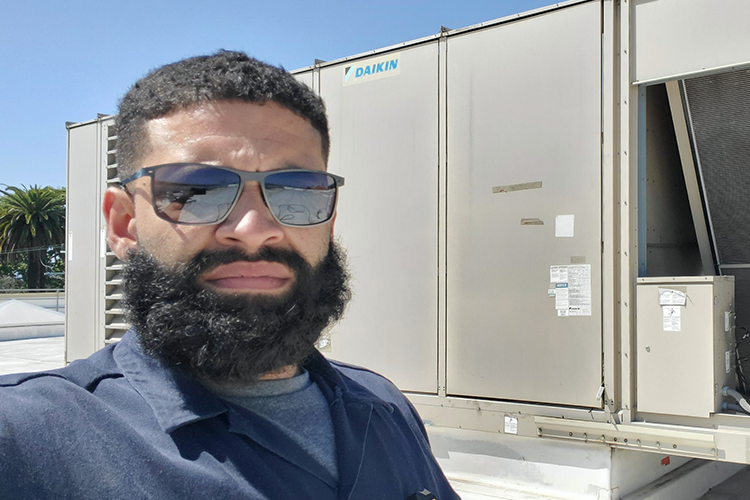 When a chance encounter threw his career into shambles, Brandon Davenport had to scramble to “It was like a nightmare,” he said. “I thought I was living a nightmare and felt like I would wake up any minute.”

But it was not a nightmare when in 2018, Brandon attempted to break up a fight between two women in a store and ended up being charged with assault. He had been working for nearly 10 years as an EMT and a fire fighter. When he was charged, that was taken away.

Brandon didn’t have much time to waste. He had a wife and five kids to support and needed to find a new career quickly. He decided it would be a good idea to learn a trade and enrolled in the HVAC Program at UEI College in Huntington Park.

SOMETHING TO BE PROUD OF

Brandon never expected himself to be going back to school. The transition was not always easy.

“I got lost,” he said. “For the first time in my life I had no idea what direction I was going but down. Midway through the course, I became very optimistic and excited again. It lit a fire inside me that had been extinguished.”

Throughout the program, he found support from his instructors.

“He was a pleasure to have in my class,” said Jose Zalapa, HVAC instructor. “It was his morals. He has a good work ethic and has a good foundation as far as his morals. He always did everything by the book. He never tried to take shortcuts. I think that’s the main thing. He was punctual and he was consistent. That’s what it takes to make it in this trade.”

Brandon also had his kids to think about.

“They saw everything,” he said. “I was the typical dad and they saw me as a hero. After I lost everything, I thought of myself a lot differently, but they didn’t waver. I was still their hero. I needed to rise to the occasion. I needed to begin something that they could be proud of again.”

THE SKY IS THE LIMIT

HVAC provided a new way for Brandon to help people.

“I like providing service for people. That’s what I’ve done for the earlier part of my life in public safety. I enjoy helping people,” he said. “If it’s making them more comfortable it’s still a rewarding feeling. You helped someone. I also enjoy the type of work, the critical thinking, the problem solving, and you’re trusted to work on your own.”

When he graduated, Brandon said he was inundated with all the job opportunities before him. He was thrilled to accept a position at a non-profit serving children with developmental disabilities and their families. He’s now helping maintain all their buildings, including their HVAC systems.

“To be turning down offers and have your pick of the litter was certainly a rewarding feeling,” he said. “The feeling I have now is an appreciation for everything. I really appreciate my teachers and everyone who helped me where I need to be to take care of my family.”

Brandon said he has seen the value in learning a trade and he would recommend this path to anyone.

“Learn a trade as quickly as possible and be extremely dedicated to learning it and soaking it up like a sponge,” he said. “You’re going to get out of the program as much effort as you put into it. If you’re putting in mediocre effort you can’t expect a great result. If you take it seriously and put all your time and energy and focus into it, the sky is the limit.”