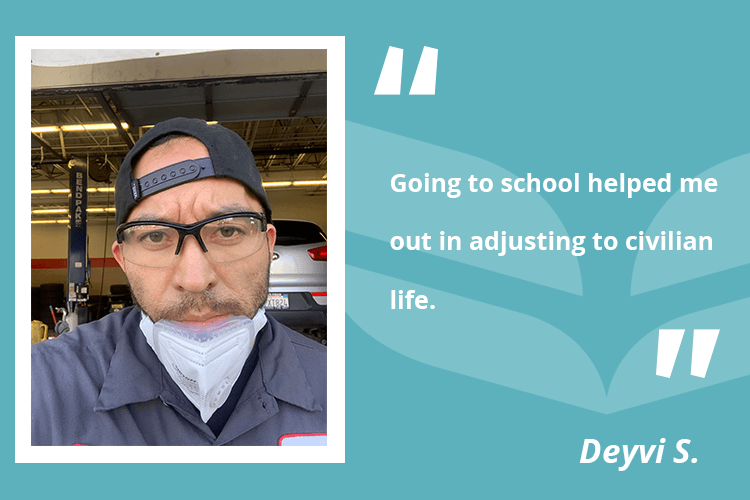 After suffering a traumatic brain injury, Deyvi Salmeron had to retire from military service and struggled returning to civilian life, but he found a new path for his life by completing not just one – but two – programs at UEI in West Covina.

In the Army, Deyvi Salmeron served as a combat engineer in both Iraq and Afghanistan. As such, one of his duties was to help clear routes so fellow soldiers could travel in relative safety.

His own safety, though, was on the line each time he went out on another mission.

“Our job was to look around for bombs in the road,” said Deyvi, a native of Los Angeles. “Sometimes we’d find them, and sometimes they’d find us. We got hit a lot, got shot at … just living the military life.”

Deyvi joined the Army at 17 after having long dreamed of becoming a soldier. And, while the camaraderie and order appealed to him, he was forced to medically retire in 2014 after suffering a traumatic brain injury (TBI) and post-traumatic stress disorder (PTSD).

Unfortunately, these conditions only served as a precursor to difficulties yet to come.

A divorce, financial troubles, and a bout with homelessness led him to one of the lowest points in his life, but in a way — be it that mission-driven spirit he learned in the Army or a natural inclination to fight — this moment only served to strengthen his resolve.

And, he did. After graduating from both the electrician technician and automotive and programs at UEI College West Covina, Deyvi is now the Assistant Manager at a Big O Tires in the Los Angeles area.

A Lesson in Perseverance

Deyvi has always worked on his own car. As a rule, he insisted on it. So, pursuing a career as an automotive technician seemed to be the most natural fit for him.

Yet, as a teen, the soldiering life called, and he answered enthusiastically. It’s a life he continues to miss, despite the injuries and hardships he faced during and after years of active duty.

“In the military, your whole company becomes your family, and someone is going to be there for you no matter what,” he said. “Even though I’ve been out of the military now for a while, I’m still trying to adjust. It’s kind of hard getting into the routine of being a civilian.”

The pursuit of just such a “routine” and a level of so-called normalcy is part of what motivated Deyvi to pull himself up by the proverbial bootstraps. He’d suffered enough misfortune since retiring from the military, and he was ready to prove he still had some fight left in him.

That’s when he came across a UEI College ad on Facebook. After calling and eventually scheduling an on-campus meeting, Deyvi enrolled in the auto tech program in 2018.

“Going to school helped me out [in adjusting to civilian life],” he said. “It gave me something to do, something to shoot for. And, whatever I had to do to graduate, I just started doing no matter what was taught.”

Andrew Flexen is one automotive instructor Deyvi turned to when he needed a little extra guidance or inspiration. Not only was he attentive to all questions the students had, but he let the students work on their own vehicles as part of the learning experience.

“Deyvi is one of the most dedicated students I ever had the privilege to instruct. His military background plays a huge part in his work ethic and devotion to excel in everything he is passionate about,” Andrew said. “Deyvi’s continuing perseverance and hard work makes me extremely proud to be a part of his amazing journey.”

Deyvi graduated from the automotive technician program in 2019. Then, he returned to UEI to take the new electrician technician program, from which he graduated in the fall of 2020 thanks to the guidance of such instructors as Jose Del Castillo and Marco Vazquez.

“No matter what, most all the instructors are there to help you out in most any way you need it,” Deyvi said.

“It was a pleasure to have him in my class. I could see how Deyvi would be a great manager for any business. I know he’ll continue to be successful,” said Electrician Instructor Marco Vazquez.

When Deyvi looks back at his life between the Army and when he first connected with UEI, he sees a man living in a dark place — lost, alone, and unsure if the future held a place for a guy like him.

“Pretty much how I felt back then, I probably wouldn’t be here right now,” he said. “I would have never gone to school. Coming back to the world, the divorce … everything hit me at once. It kind of messed me up a little bit.”

By seeking out a new mission for himself — a mission based around education and personal enhancement — he not only works as an assistant manager, but he also does part-time electric work for a friend’s business.

And, he has a new girlfriend, Erlinda, who’s helped surround him with a support structure that encourages him to always improve … to always seek “better.”

“She’s the one who first told me it was time to do something for myself, like go to school,” Deyvi said. “She’s always there to help me and motivate me as I move forward in life.”

And, he knows he always has the support of UEI College and its faculty whenever he needs guidance.

“If you’re trying to go to school, UEI is the best place to go,” he said. “Not only will they support you however you need it, but no matter how much you think you know, you’re always going to learn something new.”