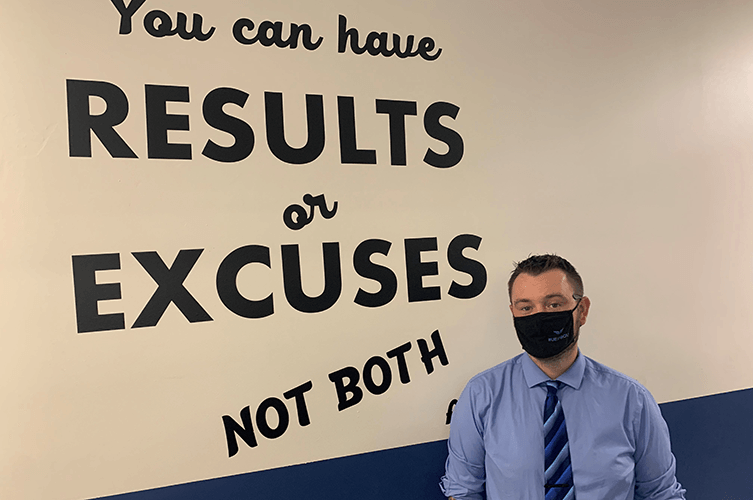 When he was having a bad day, John Zeller would stand in front of the wall of “rising stars” on campus at UEI College in Fresno and find his star. During new student orientation, he wrote down the reasons why he was at UEI on it: A better future for himself, and the ability to help his family. The ritual of finding his star on that wall would remind John of the really bad days that came before he found UEI. And there were many. John grew up in Fresno and dropped out of high school in the 10th grade. He worked a few ill-fitting jobs, but due to a series of wrong choices, he eventually became unemployed and homeless.

“Every time I looked at that star it encouraged me to keep pushing ahead. To keep going,” he said. “I made a lot of bad decisions, which is how I ended up where I was at before coming to UEI, and I didn’t want to go backwards. I was 30-years-old and living out of a friend’s car in his driveway. I decided that was not what I wanted for myself. I didn’t want to live like that anymore.”

John’s determination for a brighter future led him to UEI College, where he met with an admissions rep and made the decision to enroll in the former Computer System Technician program. He enrolled through the Eligible Career Pathways Program (ECPP), which enabled him to earn his high school diploma though an Adult Education provider while concurrently completing his vocational training.  “I am very grateful for UEI College. This place changed my life,” he said.

Jim York, Vice President of Learning, Culture and Innovation, was serving as the Campus President in Fresno at the time John enrolled. “When I first met John, he was rough. Unkempt. Unshaven. Unpolished.  But, I could tell there was something very special about him. John has heart. He has grit,” Jim said.

“During his tenure as a student at the campus, John would stop in and we would talk. He told me about his history, about his love and respect for his dad,” Jim added. “He spoke of his fears. He spoke of his dreams. Soon, week after week, I began to notice subtle changes in John. His clothes were neatly ironed. He shaved. He began to speak with confidence.  He spoke with passion about the things he would do to help other students.”

“My UEI graduation was the first time in many years that my entire family all got together, especially for my parents because they are divorced,” John said. “I went from being the only high school dropout in my family to being the only one who went to college. It was a great feeling.”

What John wrote on his star has become reality, thanks to his personal perseverance and hard work. Today, he is able to support and care for his elderly father and he enjoys a new career. Prior to graduation, he volunteered his time by engaging in IT functions on campus. John subsequently secured a position in his field of training as a computer technician. However, when he learned there was an open position in admissions at UEI, he decided to apply and was hired.

From UEI Student to Employee

“Like many of us, John understood – and experienced – the power of self-transformation. He told me he wanted the job because he wanted to be someone who would make a difference in the world,” Jim said. “I could not have been happier, or more proud when John accepted a role with the organization.”

“I love every second of my job here. I walk these halls with my students and remind them that sometimes you are going to have bad days, sometimes things don’t go right. But you can never give up. Things aren’t easy. A lot of our students are going through difficult situations and I can relate to that from my experiences. I’m able to talk with them about those challenges and genuinely connect with them,” John said. “I go to every graduation and when they call my students’ names, I get that sense of satisfaction that I helped them along the way, just like UEI did for me.”

“John is working on a promotion to Senior Level Admissions Professional. He is good at his job because, when given the opportunity, he shares his story with every potential student. He deeply believes in the power of a UEI education because it shaped the life he now lives,” said Ada Clower, Executive Director at UEI Fresno. “John is one of our most-loved advisors. He is always positive and has a smile for everyone. I have seen him grow exponentially in the last two years. We are very proud of him.”

“John is a positive ball of energy. I recall meeting him for the first time and noticed him put up his UEI College Diploma in his Cubicle. I asked him if he graduated from UEI College and he said ‘Yes, and I am so proud of it. That is why I want to help others. Thank you to UEI for believing in me.’ His personal background and struggles have taught him about human decency, courage, and never giving up. He deeply cares about students and their success, and they see that,” said Ally Vaaler, Regional Vice President of Operations at UEI. “I am not only proud of him, but I am also inspired by him.”

“Now John is the one who listens to those who need to be heard.  Now John helps others transform, just as he did.  He is living his dream of making a difference in others’ lives. John has come full circle – and I can think of nothing more powerful,” Jim said.